The Russian Sauna is Not for the Weak

In the Russian sauna, it seems customary (to Westerners) that one must a) subject oneself to extremely hot temperatures, then b) go jump in a lake, then c) return to the Hades-hot sauna to get flogged with twigs, then d) go jump in the frozen lake again. So, what’s not to like about a Russian Banya?

But wait - that’s not even the shocking part about the Russian sauna. Once you’ve sat in the high temperature for five or ten minutes, the idea of jumping into a snow bank to cool off is very inviting. And while the shock of the cold is briefly (and literally) breath-taking, you are pleasantly surprised at how invigorating it feels afterwards! The Russian Banya sauna is not for the weak, but it is an experience.

History of the Banya

The word banya (“bon-ya”) is actually derived from an Italian word for bath. The banya has its origins with the Finns who developed the traditional sauna centuries ago. Harnessing the healing powers of steam, the sauna was also adopted by Russians as a sweat lodge to improve and maintain good health by stimulating the sweat glands to rid the body of toxins and boost the immune system. 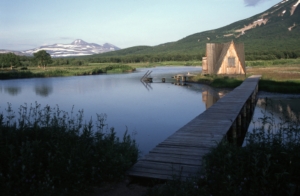 The nomadic tribes of what is now Russia fashioned sweat lodges that resembled saunas that were similar to others found around the world. The ancients would build a hut, possibly of clay or turf or wood, and place a collection of hot rocks in the center.

The philosopher Herodotus wrote about the Russian people of the Black Sea region building felt-covered huts (the early Russian sauna or banya) which were hotter inside than any Hellenic bath back in his native Greece.

He observed how the people would toss hempseed onto the hot rocks, then beat themselves with whisks to cleanse the skin, followed by pouring cold water down their bodies to cool off.

Since Russia has a cold climate for much of the year, it makes sense to follow the practice of cleansing oneself with hot heat inside a Banya or Russian sauna rather than be wet and naked from a bath, and lowering one’s resistance to diseases.

To stay healthy, the hot room full of dry stream was probably one of the best inventions since the wheel.

Going ‘One Up’ on the Finns?

So how does a Banya differ from the Finnish sauna? It seems the Russians try to make theirs hotter, like a steam sauna on steroids. They use a massive brick oven (more like a furnace) that encases the stones, rather than leave them open sitting on top of the stove.

According to the Lonely Planet guide, the Russian steam room or Parilka gets so hot it “makes the Finnish sauna look like a warm room.” And there you have it. The steam seems near scalding when it explodes off the rocks, all the more invigorating when you stand up to whip the person next to you with a bunch of birch branches.

Oh the joy! And followed by a plunge in a lake or snow bank! Assuming you survive the Banya, you can then treat yourself to a nip of vodka. So what’s not to like about a Russian sauna?